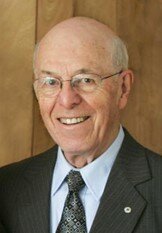 Robert A. Wilhelm, 93, of Dyersville passed away Tuesday, December 13, 2022, at MercyOne Senior Care in Dyersville.

A Mass of Christian will be held at 10:30 am on Tuesday, Dec. 20, 2022, at St. Francis Xavier Basilica in Dyersville with burial in the church cemetery.  Rev. Philip Agyei will officiate.

Bob was born on January 5, 1929, in Dyersville, the only son of Edmund and Armella (Klostermann) Wilhelm.  It was at the University of Iowa where Bob met the love of his life, Catherine Arganbright.  He married Catherine on Thanksgiving Day, November 22, 1951, in Guthrie Center, Iowa.  Together they raised 11 children.

At the beginning of his career, Bob worked in Mount Pleasant for six years before moving to Dyersville to work for Elmer Westmark at Corner Drug Store in downtown Dyersville.  Bob and Catherine bought the business and Bob continued as Pharmacist there until retiring in 1993.  During his career Bob served on the State of Iowa Pharmacy Board and won the Bowl of Hygeia State of Iowa Award.

Bob was instrumental in the building of The Dyersville Community Hospital and served the community as a member of the Dyersville Knights of Columbus Council 1734 (and Dubourg Assembly), the parish School Board, the Dyersville Lion’s Club, and was awarded the Dyersville Citizen of the Year.

As a member of the Dyersville Historical Society, Bob played a key role in a number of projects, including moving the Christoph House to the Dyersville Commercial Club Park and the purchase and renovations of the Dyer Botsford House.

He was preceded in death by his parents, stepmothers: Mary Koelker and Marcella Klostermannn, and one great-grandchild, one sister in infancy, a stepsister, Elaine O’Brien, and a stepbrother, Dale Klostermann, and several in-laws.

Memorials are preferred to the Dyersville Historical Society or the Dubuque County Right to Life.