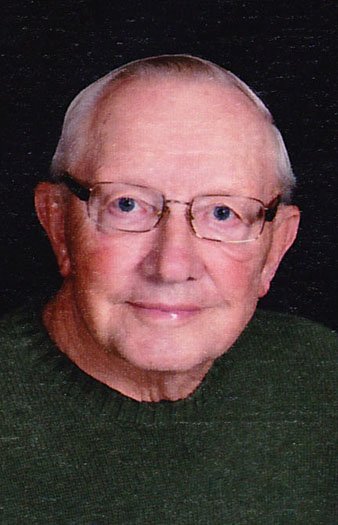 John Edson Andreesen, 88, passed away Saturday, November 28, 2020, at the Clarissa Cook Hospice House in Bettendorf, Iowa, after a period of declining health.

John was born March 24, 1932, in Anamosa, Iowa, the son of John and Bessie Fern Andreesen. As a child, John lived in rural Anamosa, Iowa, where his family farmed. John graduated as valedictorian of Anamosa High School in 1949.

After high school, John began farming with his dad and brother Bob until he was drafted into the Army. He served his country for two years driving trucks in the Korean War.  John was proud of his military service and actively supported the American Legion and served as legion commander in Anamosa in 1963.

After returning from the war, John met a wonderful young woman who was just finishing nursing school, Janet Greenawald.  They dated for about a year before they married on September 4, 1955, in Anamosa. They were married for almost 65 years and together they had five children.

John continued to farm just east of Anamosa and also worked for Pioneer Hi-Bred and Golden Harvest Seeds as a salesman and district manager. John was a successful farmer and seed corn salesman, earning multiple awards over the years. John retired from farming in 1994, and rented out the farm. After farming, he continued to work part-time in the construction industry and for Kramer Funeral Home. John was an active member of Wayne Zion Lutheran Church.

John and Janet lived on their farm until 2018 when they moved to the Fountains Senior Living Community in Bettendorf. John was an avid supporter of his children and always attended their school events at Anamosa High School whether it was sports, band, or academics. John would try to make every event even if it was out of town and meant driving long miles at the end of an already work-filled day. John loved his Iowa Hawkeyes and had season tickets for football and basketball games for over 50 years.

The Andreesen family is forever grateful to the caretakers and staff at the Fountains Senior Living Community who took extra special care of John the last several months. Thank you also to the Clarissa Cook Hospice House for their care of John his last few days.

Online condolences may be left for the family at www.kramerfuneral.com. Cards, letters, and memorials may be sent to Kramer Funeral Home, PO Box 791, Monticello, IA, 52310-0791.