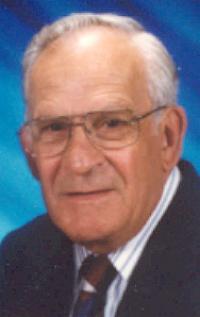 Roman Haag, age 77, of Monticello, Iowa passed away on Friday, January 30, 2004 at the Mercy Medical Center in Cedar Rapids after a brief illness. The family will receive friends on Monday, February 2, 2004, from 3 - 7 p.m. at the Kramer Funeral Home in Monticello, where a parish scripture service will be held at 6:30 p.m. followed by a Knights of Columbus Rosary. Funeral services will be held at 11:00 a.m. Tuesday, February 3, 2004, at Sacred Heart Catholic Church in Monticello with Rev. Donald Schmitt officiating. Burial will be in the church cemetery where the Monticello Drill Team will conduct military honors. Roman was born on February 13, 1926, in Parkston, South Dakota the son of Gregor and Dora (Fritza) Haag. He graduated with the Class of 1944 from Sacred Heart School in Monticello and served his country from 1945 and 1946 in the U.S. Army. He married Kathryn Connolly on September 10, 1946, in Monticello, Iowa. Roman was employed at the local John Deere implement dealership and then began working at the Monticello Post Office for 28 years, retiring in 1990. He was an avid Chicago Cubs fan who also enjoyed bowling, fishing, following the grandchildren's activities, woodworking and spending time with his family. Roman is survived by his wife, Kathryn; 2 sons: Jerry (Dianne) Haag and Tom (Tina) Haag; 1 daughter, Marla (Jerry) Hinrichs, all of Monticello; 9 grandchildren: Aimee, Jason, John, Dan and Teresa Haag, Mark, Chris, Brian and Kayla Hinrichs; 2 great grandchildren: Aurelius "Max" Haag and Grace Hinrichs;1 sister: Lucille Loomis of Monticello, 2 brothers: Virgil (Lorraine) Haag of Monticello and Gregory (Claretta) Haag, Jr. of New Orleans, LA; 2 sisters-in-law, Wilma Haag and Germaine Haag, both of Monticello. He was preceded in death by his parents and 2 brothers: Vic and Vincent Haag, and a brother-in-law, Bob Loomis. In lieu of flowers, memorials are preferred to Sacred Heart School or the American Cancer Society.
Print
Share A Memory
Send Flowers