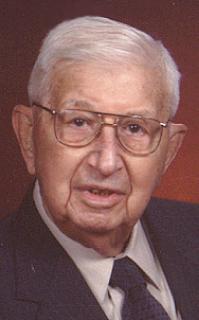 Bernard was born on July 20, 1909, in Muscatine, Iowa, the son of Henry &amp; Lucy (Rhorbach) Kuriger. He married Mary Minnis on August 22, 1933, at Sacred Heart Catholic Church in Monticello. She preceded him in death on April 20, 1977. He was a partner in Kuriger Brothers Plumbing and Heating. Bernard is survived by 3 daughters: Mary Anne (Frank) Miller and Sheila (Jim) Chambers, all of Dubuque, IA, and Kathy Kuriger of Monticello, IA; 1 son, Jack (Renee) Kuriger of Duluth, MN; 14 grandchildren: Michael Miller, Lisa Finnegan, Dawn Pregler, Daniel Miller, Stephanie Miller-Lamb, Patrick Miller, Nathan Kuriger, Peter Kuriger, Gretchen Kuriger, Jennifer Kuriger, Joshua Chambers, Sean Chambers, Luke Chambers and Seth Chambers; 13 great grandchildren: Nicole, Rachel and Mark Miller, Kate, David and Jonathon Finnegan, Ashley, Matt and Ben Pregler, Elizabeth Miller, Andrew Kuriger, Elaine and Rachel Kuriger; 1 brother, Alfred Kuriger of Savannah, Georgia; 2 sisters-in-law: Anne Ohe of Hollister, CA and Georgia Rochford of SanBruno, CA and 1 brother-in-law Ken Schwendinger of Monticello, IA. Bernard was preceded in death by his parents, his wife, 1 daughter, Pat, 6 brothers: Ralph, Karl, Louis, Clarence, Norbert and Lawrence; and 3 sisters Mildred Barry, Genevieve Muller and Rosaline Schwendinger. He was a long time member of Sacred Heart Parish where he served as an usher and on the cemetery board. Bernard was a member of the Knights of Columbus Council 1821 for 73 years where he held several offices, served as a State Deputy, and was a member of the 4th Degree Dubourg Assembly. He was also a member of the Monticello Lions Club for over 50 years during which time he received the Melvin Jones Award. He was a founding member of the Jones County Retarded Children's Association and was associated with Camp Courageous since it's inception as a member of the founding group of volunteers. He later became an honorary board member. He was on the Monticello City Council for 4 years and was a member of the Greater Monticello Committee. Bernard loved playing cards, taking on the challenge of solving a problem, cheering on the Iowa Hawkeyes, and spending time with his family. A Bernard Kuriger Memorial Fund has been established where memorials are preferred.
Print
Share A Memory
Send Flowers