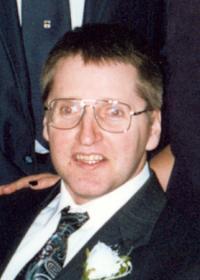 David J. "Davey" Klaren, 47 of Sunnycrest Manor and formerly of Holy Cross, Iowa died at 3:05 p.m. Friday, July 21, 2006 at Sunnycrest Manor in Dubuque from complications of Multiple Sclerosis. Friends may call from 2-9 p.m. Sunday, July 23, 2006 at the Kramer Funeral Home in Holy Cross, Iowa where the parish scripture service will be held at 8 p.m. Funeral services will be held at 10:30 a.m. Monday, July 24, 2006, Holy Cross Catholic Church with burial in Holy Cross Cemetery. Officiating will be Rev. Michael Podhajsky. Survivors include his 3 sons: Adam, Christopher and Mathew Klaren, and their mother, Vicki Fink, all of Delhi, Iowa; 1 brother, William (Andrea) Klaren of Worthington, Iowa and 2 sisters: Judy (David) Link and Joan (Gary) Miller both of Dubuque, Iowa. He was preceded in death by his father in 1987, mother in 2004. David was born April 3, 1959 in Dubuque, Iowa the son of Irenaeus "Rennie" J. and Clara M. (Hayes) Klaren. Following graduation from Leo High School in 1977, he worked as an upholsterer at Link's Upholstery. He also will be remembered for the many years he bartended at the Avalon Supper Club. At age 33 he was diagnosed with M.S., forcing him to retire shortly thereafter.He excelled in all sports and made the "All Conference Team" in basketball and baseball all four years while in high school. He continued his involvement with sports over the years. He was an avid fan of the Dallas Cowboys, the Chicago Bulls and the Minnesota Twins. He was a member of the Holy Cross Athletic Club, the Fire Department and many other school and civic organizations. He was awarded the Holy Cross "Citizen of the Year" award in 1997. His sense of humor will be greatly missed by all of those who were blessed to have known him. His positive attitude and great courage were an inspiration to all. He drew great emotional strength from his deep faith, and also from his many loyal friends and family - especially his three sons, who were the true joy of his life. He always had a special connection with the compassionate and caring people of Holy Cross who always looked out for him. The family wished to extend a special thanks to the wonderful, caring staff at Sunnycrest Manor. The personal care you gave, and the laughter you shared, gave Dave hope and strength on a daily basis. Not only were you caretakers, but also friends. Also, thanks to Hospice of Dubuque for their compassion and support in Dave's final days.
Print