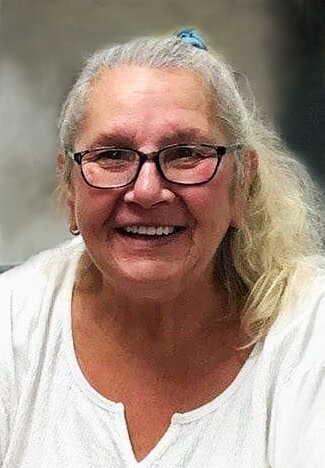 Please share a memory of Dana to include in a keepsake book for family and friends.
View Tribute Book

Dana D. Bond-Jenson, 63, of Colesburg, Iowa passed away at her home on Friday, December 21, 2022, after a coureagous battle with cancer.

Dana was born on October 27, 1959, to Virgil and Anita (Hansel) Bond. She was raised in the Colesburg area and graduated from Edgewood-Colesburg High School. She married Christopher R. Jenson at the historic Immanuel Lutheran Church in Elkport, Iowa.

Dana had several jobs in her lifetime. Her most recent job was at the Guttenberg Care Center. Dana enjoyed spending time with her grandkids, family, and friends. She also enjoyed camping and riding on the Harley. She loved to hang out with the two Tammys. It was very common for her to enjoy a cutthroat game of Uno with the Colesburg bunch on winter Sunday afternoons. She loved to do the Cedar Rapids Gazette daily crosswords and read books every night. She also loved a good Sunday Drive. She was an avid garage sale attendee.

She was preceded in death by her son, David Herman, parents, Virgil and Anita Bond, a brother, Richard Bond, parents-in-law, Stanley Sr. and Marie Jenson.

Online condolences may be left for the family at www.kramerfuneral.com or send cards to Kramer Funeral Home 750 – 12th Ave SW, Dyersville, Iowa 52040 in care of the deceased name.