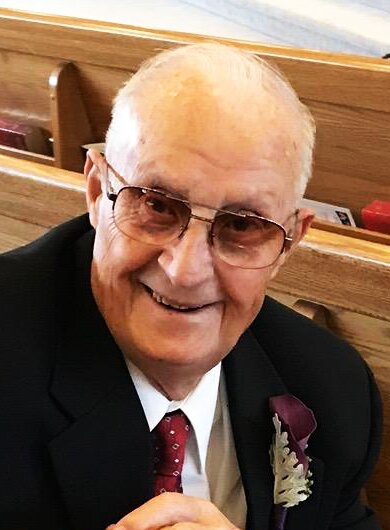 Visitation will be held 2 – 8 p.m. Wednesday, October 12, 2022, at Kramer Funeral Home in Dyersville. Visitation will continue from 9 – 10 a.m., at St. Boniface Catholic Church in New Vienna prior to funeral services.

A Mass of Christian Burial will be held at 10:30 a.m. Thursday, October 13, 2022, at St. Boniface Catholic Church in New Vienna with burial in the church cemetery.  Rev. Philip Agyei will officiate with Rev. Gary Krapfl concelebrating and Deacon Keith McCarraher assisting.

John was born on December 29, 1933 outside of New Vienna, Iowa, son of John A. and Margaret (Putz) Lansing.   He attended Saint Boniface School in New Vienna.  John served two years in the Army and was deployed to Japan.  He married Lois Krapfl of Farley on October 28, 1958 and they farmed in New Vienna for many years.  John had a strong Catholic faith and served on the Saint Boniface Parish Council and Holy Name Society,  He and Lois sent nine children through the doors of Beckman Catholic High School and served on the Endowment Board, Booster Club, Band Parents Association and various other organizations in the community.  John was an active supporter of the Saint Boniface Parish and catholic education, earning an induction into the Blazer Hall of Fame.  He volunteered at the Heritage House in New Vienna and served as a Bank Board member for Citizens Saving Bank.  John was the number one super fan of his children and grandchildren’s activities, logging uncountable hours of bleacher time at sporting and fine arts events. John enjoyed watching the Hawkeyes, was an avid reader and showed a keen interest in current events.

In lieu of flowers, a John and Lois Lansing Memorial Beckman Catholic Scholarship has been established, memorials are preferred.

Online condolences may be left for the family at www.kramerfuneral.com or send cards to Kramer Funeral Home 750 – 12th Ave SW, Dyersville, Iowa 52040 in care of the deceased’s name.