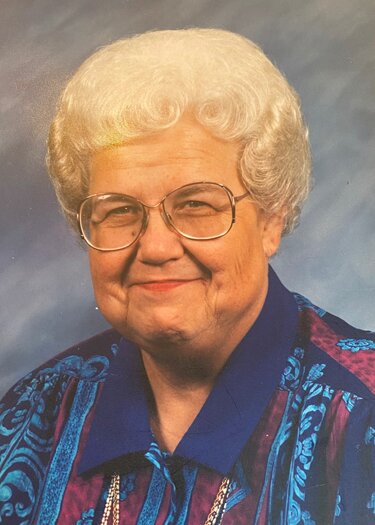 Please share a memory of Verla to include in a keepsake book for family and friends.
View Tribute Book

Visitation will be held from 10 – 11 am Friday, April 1, 2022, at Calvin Sinclair Presbyterian Church, 715 38th St SE, in Cedar Rapids where a funeral service will commence at 11 am.  Rev. Dr. Dennis E. Morey will officiate.  Private burial will be at Mount Calvary Cemetery in Cedar Rapids.

Verla Madonna Nipper Longer was born March 11, 1932, in Waukon Junction, IA, the daughter of Elvis O. and Cora (Atall) Nipper.  She was the youngest of their 4 children and attended school in the Waukon Junction area and was taught for several years by her older sister, Vivian. Her growing up years were challenging as her parents ran a hotel and restaurant and she had to help as best she could.  Later the family moved to Cedar Rapids, IA where she graduated from McKinley High School. Although she never attended college, in her early adult years she worked for Iowa National Mutual Insurance and Commercial Credit Corporation.  In 1959, she and W. Willis “Bill” Longer were married.  Bill was a Presbyterian minister and that occupation led them to a few different churches in the Midwest including Highland, WI, Belle Plaine, MN and Monticello, IA.  In 1963, they adopted their daughter Corlyn and in 1966, their son Wayne.

After moving to Monticello in 1971, Verla worked for Insurance Associates for 23 years and City State Bank in Central City, IA. She was very active in the insurance industry and was a member of the National Association of Insurance Women serving as a State Director for one year and as the President of the Insurance Women of Dubuque for a year.  For 15 years, she continued working as a Licensed Insurance Agent and also worked with her longtime friend Maria White doing bookkeeping and helping with her art business “Maria’s Art.”  They traveled to many craft and art shows in the Midwest. She was a self-taught keyboard player and for many years played piano or organ at church and other events.  One of her favorite activities was playing piano/organ duets.

Her best friend in the whole world was her older sister Vivian.  They took several guided bus tours to Branson, MO and would travel together with Bill to visit Corlyn and her family in Michigan. After a hip replacement which forced her to “retire” (much to her great dismay), she spent her later years at home with Bill and Wayne, attending church at the First Baptist Church in Anamosa or at Calvin Sinclair in Cedar Rapids, enjoying her time with her cat and watching the Cubs baseball games. She loved spending time with her family most of all and looked forward to holiday gatherings and coconut cream pie with her son-in-law Joe. After Bill was moved into the nursing home in 2019 and she was experiencing increased health issues, her son Wayne and niece Jill provided care and comfort to her.  The last 3 months of her journey were spent as a resident at The Monticello Nursing and Rehab Center where the staff all said she had such a sweet disposition and loved her dearly in such a short time. She was a very giving soul helping those who needed her most.

She is preceded in death by her parents, sister Vivian Huffman, brothers, Norman Nipper and Elvis “Bud” Nipper, and nephew-in-law Gordy Marr.