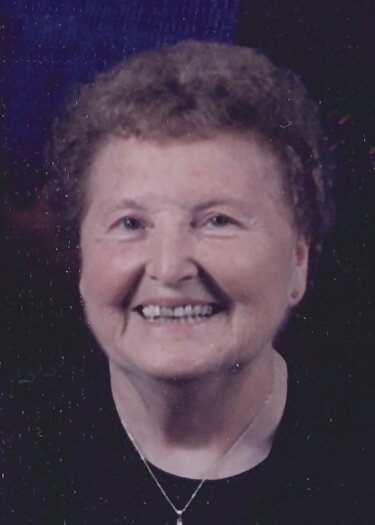 Please share a memory of Aletha to include in a keepsake book for family and friends.
View Tribute Book

Aletha was born January 15, 1929, in Temple Hill, Iowa the daughter of Pete and Lizzie (Mootz) Takes.  She graduated from St. Mary’s High School in Cascade and earned her teaching certificate at the University of Dubuque.  She taught at Pleasant Hill and Castle Grove Schools.  Aletha married Tom Hughes on January 4, 1950, at St. Patrick’s Catholic Church in Temple Hill.  She enjoyed being part of Tom’s racing career and claimed many victories of her own on the track.  Her first win was at Tunis Speedway in Waterloo, Iowa in Tom’s 1957 Ford Fairlane.  She was always there to cheer on her children and grandchildren who inherited the love of the sport.  She always had a large garden and canned all summer long.  Raising 13 children, Aletha was an excellent example of hard work and honesty, showing her children that they could achieve anything with a good work ethic.  She was a Tupperware dealer for many years and enjoyed all the new friends she made while being involved with Tupperware.  She was an excellent cook and started the tradition of having a Christmas cookie bake with her grandchildren and continued the tradition with her great grandchildren.  She was a lifelong member of Sacred Heart Church.  She was a loving wife, mother and grandmother and will be greatly missed by all who knew and loved her.

She is preceded in death by her husband, Tom, in 2001, a daughter Gayle (Billy) Bleadorn in 2010; siblings: Helen Fullbright, Evelyn Takes, Marv (Vivian) Wagner and Guy (Marie) Wagner.

Memorials are preferred to Sacred Heart School in Monticello.

Visitation Prior To Mass