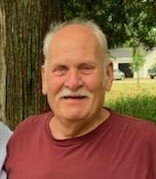 Please share a memory of Russell to include in a keepsake book for family and friends.
View Tribute Book

A graveside service will be held at 10:30 on Saturday, September 18, 2021 at the Hopkinton Cemetery.

Russ was born December 26, 1946 in St. Charles, IL to Willis and Willa Mae (Loop) Johnson.  He graduated from Monticello High School with class of 1965.  Russ worked various jobs including Collins Radio, Police Officer in Monticello, security guard at Wilson Foods, and a Machinist in New Hampshire.

He was preceded in death by his parents, a brother Carl Johnson in 2006, and Mary Jane Miller his partner in life.

Share Your Memory of
Russell
Upload Your Memory View All Memories
Be the first to upload a memory!
Share A Memory