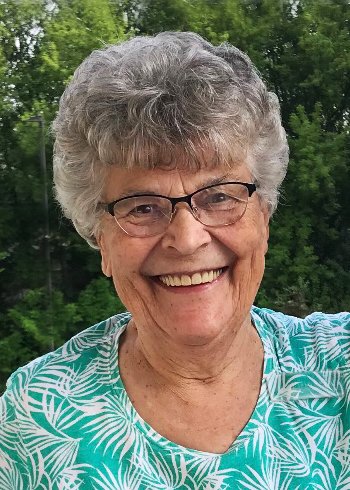 Please share a memory of Marita to include in a keepsake book for family and friends.
View Tribute Book

Marita V. Oberbroeckling, 87 of Algonquin, Illinois and formerly of Dyersville passed away August 12, 2021,at her home.

Visitation will be held from 4-7 p.m. on Thursday, August 19, 2021, at Kramer Funeral Home in Dyersville.  Visitation will continue from 9-10 am on Friday morning prior to the funeral mass.

A Mass of Christian Burials will be held at 10:30 a.m. on Friday, August 20, 2021, at St. Francis Xavier Basilica in Dyersville with burial in the church cemetery.  Rev. Dennis Quint will officiate.

Marita was born to Rudolph and Lidwina (Schmerbach) Henkels on November 12, 1933. She grew up on the family farm near Luxemburg, Iowa with seven brothers and sisters.  After going home from the dances in Guttenburg with Gene and writing love letters, she married her U.S. Army sweetheart on Aug. 20, 1956.

She packed a lot of punch in her 87 years. Looking back, she was a clerk for Sears and Roebuck and secretary at Techny Seminary, an Avon lady, a seamstress of Barbie doll clothes and quilts for the hospital bazaars, a creative for the bibs sold at the Field of Dreams movie site, a cook at the Dyersville hospital and kindergarten, a Girl Scout leader, a bus driver for the Western Dubuque School District, and President of the Dubuque Quilter’s Guild.  She also enjoyed being a member of the Auxiliary of the American Legion and singing in the Basilica Resurrection Choir.

Marita became proficient on the computer and utilized email, games and Facebook to keep up with her family and friends, near and far.  Perhaps most satisfying were her weekly Euchre games she played online with her dear friends, Vera and Lila, after she moved to Illinois.

She and Gene enjoyed many long winters in Florida, making long-time friends at Strawberry Ridge in Valrico and traveling with Dyersville friends around the country and to Germany. Marita’s pastimes in retirement included quilting, baking for the farmer’s markets, playing many, many games of cards, and working jigsaw puzzles. Soon after Gene passed away, she made the decision to move to a retirement community in Algonquin, IL to be near her children.  Clarendale of Algonquin became home to her, and she enjoyed the companionship of new friends. Rest assured, the Bingo jackpot can now be won by others during their weekly games. During the past 3 years, she was an Ambassador for Clarendale where she served as host for new residents.

What seemed most unusual to her kids once Gene died was her interest in watching the Cubs play, win, and lose on TV. She knew the players, the pitchers, and their place in the standings.  Gene probably said ‘atta girl’ as she waltzed through the pearly gates.