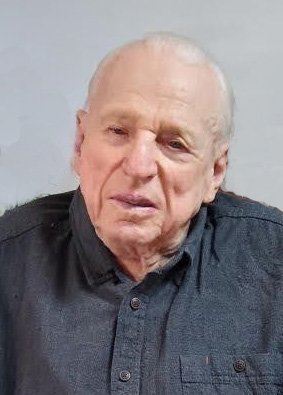 Please share a memory of Merlin to include in a keepsake book for family and friends.
View Tribute Book

Visitation will be held from 9:00 a.m. 10:45 a.m. Friday, April 9, 2021, at Holy Trinity Catholic Church in Luxemburg. Cards and letters may be mailed to the family in care of Kramer Funeral Home, 750 12th Ave SW, Dyersville, IA 52040. Please include first and last name Merlin Leick on the outside of the envelope.

A Mass of Christian Burial will be held at 11:00 a.m. Friday, April 9, 2021 at Holy Trinity Catholic Church in Luxemburg with burial in the church cemetery, military honors will be accorded by the VFW Post # 7736 and the Iowa Honor Detail.  Rev. Noah Diehm will officiate.

Merlin was born June 1, 1931 in North Buena Vista, Iowa, son of Joseph and Leona (Klein) Leick. Merlin grew up on the family farm and then served in the United States Army from 1952 to 1954 during the Korean War.  Later he worked at John Deere in Dubuque for 32 years.  He served as councilman in Luxemburg for 30 years, in addition to 4 years as mayor.  He was a member of the New Vienna VFW club #7736.  Merlin started Leick Small Engine Repair in Luxemburg in 1971.  The family business continues today, owned and operated by Bob Leick.

On August 20, 1957 he was united in marrage to Ruth Ann Meyers at Holy Trinity Catholic Church in Luxemburg.  He was a member of the Holy Trinity parish.  Merlin enjoyed snowmobiling, mowing lawns, cutting firewood, country music, motorcycling, and especially loved spending time with his children, grandchildren and great-grandchildren.

In lieu of flowers, memorials are preferred.

Share Your Memory of
Merlin
Upload Your Memory View All Memories
Be the first to upload a memory!
Share A Memory