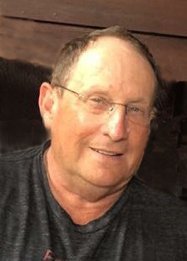 Bradley A. Jones, 71, of Jefferson, South Dakota and formerly of Iowa Falls, Iowa, passed away Friday, December 7, 2018, at his son’s home in Dyersville surrounded by his family.

A Mass of Christian Burial will be held at a later date in Jefferson, SD with burial at St. Peter’s Cemetery.

Bradley was born March 8, 1947 in Sioux City, IA, the son of Edward and Barbara Jones. Brad graduated high school in 1965 from Benilde High School (St. Louis Park, MN) in 1965.  He continued his education at Mankato State University (Mankato, MN).  Following in his father’s footsteps Brad joined the United States Navy in May of 1966.  He did two tours in Vietnam on the USS Isle Royal & the USS Forrestal in commissary & supply.  Returning home in March of 1968 & continued his military career in the US Navy Reserve until January of 1972.

He married Mary Margaret Bernard at St Peters Church in Jefferson, SD on April 27th, 1974.  In 1976 Brad enrolled in Brown institute (Minneapolis, MN) and graduated with an associate’s degree in Radio Broadcasting.  Years following, Brad did whatever necessary to provide for his family.  Working in the transportation industry specializing in food delivery for company’s such as Metz Baking Co, & Old Dutch Foods.  One of his favorites to be remembered was the 6 years he worked as a Schwan’s man out of the Holstein, IA depot.  After settling in Iowa Falls, IA in the Summer of 1991 Brad worked for Advanced Drainage Systems (ADS, Eagle Grove, IA).  Delivering drainage tile throughout the Midwest for the next 20 years. He prided himself in safety, walls were adorned with plaques & certificates to prove it.  He retired, driving over the road for his son’s company Jones Transport (Dyersville, IA) in 2013.

Brad’s hobby was his kids, he prided himself in making every one of his kid’s wrestling tournaments, basketball games, or track meet’s.  He was always competitive & loved playing basketball in the back yard or card games with his family.  Racquetball was always one of his favorites and boasted of his hand-eye coordination.  His love for his family & his country will always be cherished & never forgotten.

He was preceded in death by his parents, parents-in-law Marcus and Margaret Bernard, sister-in-law Lisa Wachlarowicz, and brother-in-law Greg Kettler.