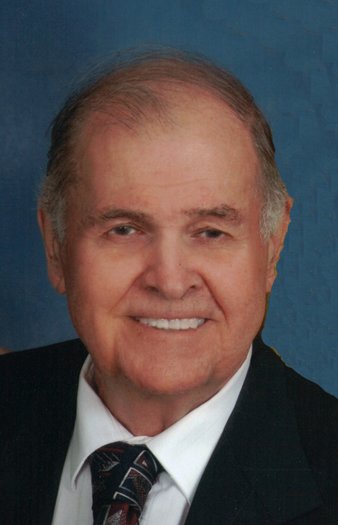 John J. Kirsch, 88, of Dyersville died Saturday, Feb. 13, 2016, at the Good Neighbor Home in Manchester after a long illness. Friends may call from 2 – 8 Tuesday, Feb. 16, 2016, at the Kramer Funeral Home in Dyersville where a parish vigil service will be held at 2 p.m., a Knights of Columbus Rosary of Christian Hope will be recited at 5:30 and an American Legion Service will be held at 7 p.m. Visitation will continue from 9 – 10 a.m. Wednesday at the funeral home. A Mass of Christian Burial will be held at 10:30 a.m. Wednesday, Feb. 17, 2016, at St. Francis Xavier Basilica in Dyersville with burial in the church cemetery. Rev. Dennis Quint will officiate and military honors will be accorded by the Edward W. Lake V.F.W Post 7736 and American Legion Post 137. John was born March 26, 1927, in Worthington, IA the son of John and Mary (Burlage) Kirsch. He graduated from St. Paul High School and enlisted in the Navy where he was on a ship bound for Japan as the War ended. He married Grace Bockenstedt on January 29, 1952, at St. Boniface Catholic Church in New Vienna. He worked for General Telephone for over 40 years, and served as Mayor of Dyersville for 6 years in the early 1980’s. John is survived by his wife of 64 years, Grace; his children: Jane “Selena” Omega of Colorado Springs, CO, Carmen Burns of Cedar Rapids, Dave (Judy) of Dyersville, Linda (Dan Snyder) Kirsch of Anamosa, Charlie (Teresa) of Chesterfield, VA, and Nick Kirsch of Cedar Rapids, Rob (Tiffany) Kirsch of West Des Moines, IA; 12 grandchildren: Angie and John Purnell, Kerri Kramer, Brian Kirsch and Krista Kirsch, Dirk and Emma Snyder, Sammy Kirsch, Allie and Derek Kirsch, Gavin and Brynn Kirsch; 3 great grandchildren: Julien, Jude and Sylvia Kramer; 3 sisters-in-law: Alice, Dula and Virgene Bockenstedt. He was preceded in death by his parents, a grandson, Grant Henry Kirsch, 9 brothers and sisters; 4 brothers-in-law and 1 sister-in-law.
Wednesday
17
February

Share Your Memory of
John
Upload Your Memory View All Memories
Be the first to upload a memory!
Share A Memory
Send Flowers