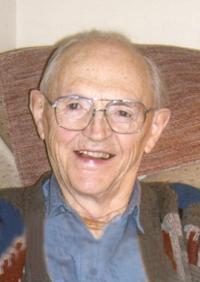 Ernie was born in Sand Springs on the Recker family farm on December 27, 1917 to Henry and Rosa (Willenborg) Recker. He married Irene K. Knepper at St Paul's Catholic Church in Worthington on January 16, 1945. He is survived by his wife Irene of Iowa City, sons Neil (Becky) of Prairie Village, Kansas, Mark (Linda) of Pella, Mike (Barb) of Iowa City and daughter Michele, twelve grandchildren: Anne, Henry, Isabel, Eric, (Amy), Bryan, (Betsy), Hillary, Lindsay (Quincy), Heather, Michael, Cami, Megan, and Caleb and two great-grandsons, Blake and Jace. He is also survived by a brother Gerald (Pearl) Recker of Dyersville and a sister Marie Moorman of Manchester. He is preceded in death by his parents and 4 brothers: Raymond, Florian, Irvin and Gilbert. Mr. Recker served in the Navy for 52 months as a radio technician 1st Class and participated in the invasion of Sicily and Corsica. He was a city postal carrier in Monticello for 25 years, a member of the Monticello Lions Club for 50 years and a Life Member of the VFW Post 1683, a 4th Degree Knights of Columbus and a member of the American Legion. Friends may call from 4 to 8 p.m. Thursday, March 15, 2007 at Kramer Funeral Home in Monticello, Iowa where a parish scripture service will be held at 4 p.m anda a Knights of Columbus Rosary will be recited at 7 p.m. Mass of Christian Burial will be held at 11 a.m. Friday, March 16, 2007, at Sacred Heart Catholic Church in Monticello, with burial at the Sacred Heart cemetery. Rev. Donald Schmitt will officiate. In lieu of flowers, the family requests memorials be directed to Iowa City Hospice, 1025 Wade Street, Iowa City, Iowa 55240 or Sacred Heart School in Monticello.
Print
Friday
16
March