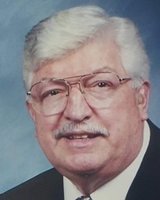 Plans for a memorial service have been postponed due to Covid-19 exposure.

Duane pastored churches in Kansas, Indiana, and Iowa. He retired from the United Methodist Church in 1999.  His last pastorate was The United Church of Monticello.

During his ministry many of the churches experienced building programs in which he contributed much in the way of his own vision and labor. He was also known for his “children’s object lessons (including sleight of hand)” and “chalk art drawing messages”.

Duane was preceded in death by his parents, his bother Jack Ferguson and his sister Mary Hughes. Also preceding him were 2 grandchildren: Stacy Jo DeJong, and Ben VanDerPol.